After its first introduction in 1999, West Nile Virus (WNV) has spread very widely along the east coasts of the United States before appearing in Texas where 1792 cases were reported of which 82 were fatal in 2012. The interesting patterns and behavior of the virus and its amplified impact on the county of Dallas drove this work. This paper encompasses a thorough development of a systems dynamics simulation model of virus's infectious behavior and dynamics in Dallas County, TX utilizing historical data collected and the aid of suitable software packages.

System dynamics is an approach aimed to understand the behavior of complex systems over time and is a very suitable tool to model infection spread. Systems are represented using feedback loops and time delays as well as stocks and flows that graphically describe the model (S.C. Brailsford 2007, Erik R. Larsen 1997). The method is based on understanding the structure of any system which might be composed of circular, interrelated, interlocking and sometimes time-delayed relationships. In order to represent system dynamics, a causal loop diagram is constructed first to illustrate all the system components and interactions all connected with positive and negative reinforcement feedback loops which indicate a quantity increase or decrease respectively. After that, a stock-flow diagram is constructed to visualize and analyze the system’s behavior in a quantitative manner. A stock is the population or quantity that increases or decreases over time whereas the flow is the rate of change in a stock (Denis R. Towill 1993, Kirkwood 2013, Fishwick 1995). That's why system dynamics simulation is largely applied in epidemiology.


West Nile Virus is a mosquito-borne disease that was first identified in the West Nile sub region in Uganda in 1937. CDC reported 30,491 cases of WNV as of 2010 of which 1196 were reported fatal. Most experts indicate that these numbers understate the reality since the symptoms of this disease are very smilar to other viral infections and therefore might be falsely diagnosed or pass unnoticed as approximately 80% of WNV infection cases in humans are subclinical which cause no symptoms. It is well established that dry weather conditions coupled with heat waves amplify the activity and life cycle of the disease and increase the infection probability since it drives birds, which is considered the primary host of WNV, to get closer to shrinking water sites where the virus is usually more active. Furthermore, drought also reduces the activity of mosquito predators such as frogs and dragonflies which increases the life span of the virus (AMCA 2011, Epstein 2001, Janousek and Olson 2006, McLean 2006).


The virus’s first detection in New York in 1999 followed by its sudden appearance in Florida in 2001 and in Texas in 2002 has motivated a lot of studies. The patterns observed of the virus spread over several distant locations was best explained to be directly related with birds’ migration as they serve as long distance travelling agents. Many studies have indicated that the virus’s activity is triggered when temperature exceeds a threshold of around 13 degrees Celsius, below which a mosquito can carry the virus but not show symptoms and not even be affected by it and it could even survive a whole winter if the temperature stayed as low as suitable (overwintering). When a mosquito gets infected after a blood meal, it doesn’t become infectious and doesn’t lay infected eggs until an incubating period passes. Such a period also exists in humans and birds and it is only when this period ends that the virus can get transmitted. Only a female mosquito with WNV titer greater than 3.5Log10 PFU is capable of disease transmission. (McLean 2006, Pollock 2008, Rappole, Derrickson and Hubalek 2000, West Nile Virus Human Disease Map 2012, Reisen, Fang, and Martinez 2006).


In this work, a conceptual virus activity model in Dallas County is constructed and required data is collected to build a simulation model representing the system’s behavior which will be used to analyze its properties and its future trends. 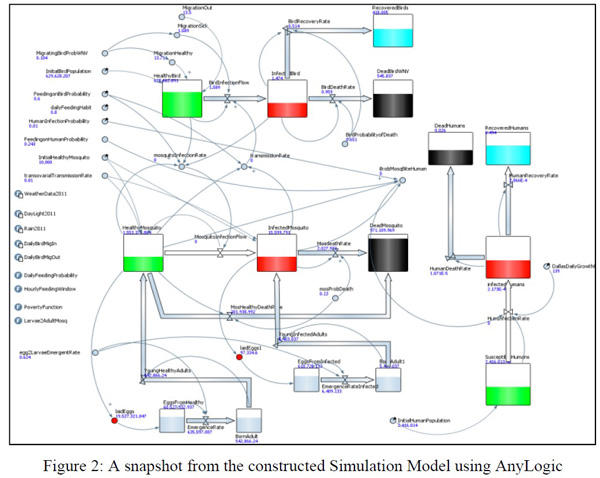