Comparison of Agent-Based Simulation and System Dynamics Models for Epidemiology

The desire to better understand the transmission of infectious disease in the real world has motivated the representation of epidemic diffusion in the context of quantitative simulation. In recent decades, both individual-based (such as Agent-Based) models and aggregate models (such as System Dynamics) are widely used in epidemiological modeling. This paper compares the difference between system dynamics models and agent-based models in the context of Tuberculosis (TB) transmission, considering smoking as a risk factor. The merits and impact of capturing individual heterogeneity is examined via representing Bacillus Calmette-Gurin vaccination and reactivation in both models. The simulation results of the two models exhibit distinct discrepancies in TB incidence rate and prevalence. Results also suggest that, at the level of practical application, agent-based models offer signifcantly greater accuracy and easier extension, especially when representing a decreasing reactivation rate, waning of immunity and heterogeneous individual attributes. Another experiment sought to evaluate the impact of network structure on TB diffusion. Simulations are conducted under three widely used network topologies, namely random, scale-free and small world. The results reveal large differences between results of agent-based models and system dynamics models, which further give insights into the difference between these two model types in the context of practical decision-making in healthcare.


Although aggregate modeling can offer powerful insights and has allowed the derivation of the foundational concepts of mathematical epidemiology, there are distinct limitations associated with aggregate modeling when the focus is upon the specifcs of the interactions or social contacts through which the infection is spreading. Spurred by increasing computer resources and the needs for realistic scenario evaluation, agent-based modeling has become increasingly popular. This reflects the fact that it lends extra exibility in terms of representing population as a system of interacting agents with heterogeneous features and abilities. Social network modeling and analysis, as a complement to agent-based modeling, takes into account the importance of contact structure, pathways of infection spread across the associated transmission and social networks. 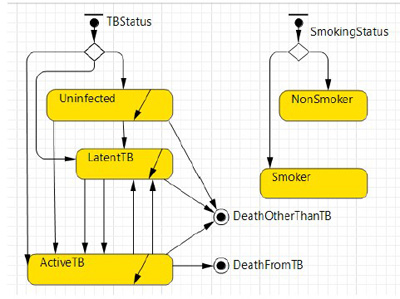