Network Centric Warfare (NCW) is a modern concept of warfare, and the core of the NCW concept is to attain information superiority from improved situational awareness. Situational awareness is improved by seamlessly connecting various entities in a battlefield, producing networked information. In order to represent an NCW combat environment in a warfare simulation, a simulation model must incorporate a process of accomplishing information superiority: acquiring battlefield information by reconnaissance units, sharing the information through a communication network, and utilizing the information in a decision process.


A combat simulation model should incorporate the process of forming a potentially incomplete situa-tional awareness. This is especially important when a combat simulation model intends to capture a combat environment of NCW. It requires modeling various elements in C4ISR (Command, Control, Commu-nications, Computers, Intelligence, Surveillance, and Reconnaissance). Of these C4ISR elements, this paper discusses modeling of the communication component. Specifically, we focus on a method to model imperfect communication, which affects a decision process of C2. To model the effects from various factors of a battlefield environment on communication, the proposed communication model adopts an approximation of engineering-level models: a propagation loss model and a communication network model. To demonstrate the utility, a simple experiment of communication between two agents and a pilot study of a close air support (CAS) scenario are presented. 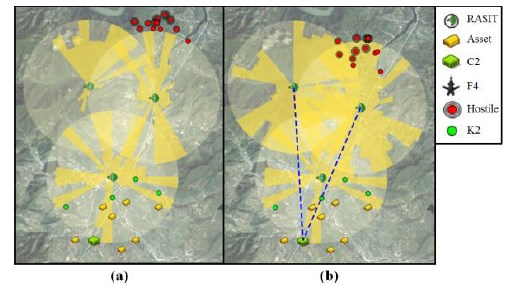