Research in biogerontology has largely focused on the complex relationship between mitochondrial dysfunction and biological aging. In particular, the mitochondrial free radical theory of aging (MFRTA) has been well accepted. However, this theory has been challenged by recent studies showing minimal increases in reactive oxygen species (ROS) as not entirely deleterious in nature, and even beneficial under the appropriate cellular circumstances. To assess these significant and nonintuitive observations in the context of a functional system, we have taken an in silico approach to expand the focus of the MFRTA by including other key mitochondrial stress response pathways, as they have been observed in the nematode Caenorhabditis elegans. These include the mitochondrial unfolded protein response (UPRmt), mitochondrial biogenesis and autophagy dynamics, the relevant DAF-16 and SKN-1 axes, and NAD+-dependent deacetylase activities.

To integrate these pathways, we have developed a multilevel hybrid-modeling paradigm, containing agent-based elements among stochastic system-dynamics environments of logically derived ordinary differential equations, to simulate aging mitochondrial phenotypes within a population of energetically demanding cells. The simulation experiments resulted in accurate predictions of physiological parameters over time that accompany normal aging, such as the declines in both NAD+ and ATP and an increase in ROS. Additionally, the in silico system was virtually perturbed using a variety of pharmacological (e.g., rapamycin, pterostilbene, paraquat) and genetic (e.g., skn-1, daf-16, sod-2) schemes to quantitate the temporal alterations of specific mechanistic targets, supporting insights into molecular determinants of aging as well as cytoprotective agents that may improve neurological or muscular healthspan. 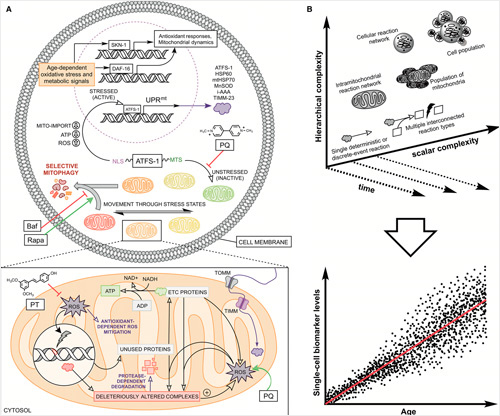