Due to the transition towards a sustainable energy supply, many electricity generation systems are faced with great challenges worldwide. Highly volatile renewable energy sources play an important role in the future electricity generation mix and should help compensate the phase-out of nuclear power in countries such as Germany. Simulation-based energy system analysis can support the conversion into a sustainable future energy system and are intended to find risks and miscalculations. In this paper we present main components of the electricity generation system models. We use a hybrid simulation approach with system dynamics and discrete event modules. This modular design allows quick model adoptions for different scenarios. Simulation results show the development of the future annual electricity balance, CO2 emission balance, electricty imports and exports, and the wholesale price of electricity.

Many electricity generation systems all over the world will be faced with a high penetration of electricity generated by renewable energy sources (RES) in the future. For instance, the Australian Government aims to ensure that the equivalent of at least 20% of Australia’s electricity will come from RES by 2020 (Australian Government 2013). The European Union enacted the “climate and energy package” in 2009 (Commission of the European Communities 2008). This policy specifies key objectives such as raising the total share of EU energy consumption generated by RES to 20% and reducing EU greenhouse gas emissions by 20% from 1990 levels. Especially for Germany the RES targets are even stronger. In 2020, 35% of Germany’s electricity should be covered by RES. Additionally, the phase-out of nuclear power leads to an even bigger challenge for the electricity generation system of Germany.


Due to the phase-out of four nuclear power plants in the next ten years, there will be a lack of approximately 5GW of guaranteed capacity for electricity generation in the German federal state Bavaria in 2023. In addition,a number of gas and oil power plants achieve their technical lifespan in the next ten years, i.e., further power plants with a guaranteed capability of approximately 2GW will be disconnected from the grid (Bundesnetzagentur 2013). On the other hand, a high amount of variable and not always guaranteed electricity generated by RES must be integrated with established energy systems. Also the building of new effective combined cycle gas turbines should help to compensate the nuclear phase-out. Energy systems simulation models can cover the most relevant parts of complex electricity generation systems in order to come closer to its understanding, to provide a tool for the investigation of various scenarios, to find risks and miscalculations, and finally to support the conversion into a sustainable future electricity generation system.


In this paper, we present a flexible, validated, and efficient electricity generation system simulation model for investigation on a larger scale. For this purpose, basic components of electricity generation systems, such as conventional power plants, fluctuating RES (wind turbines, solar panels, hydropower stations), aggregated demand profiles, and storage facilities are provided. Moreover, we are taking political (e.g., feed-in of RES has priority over conventional ones) and economic constraints (e.g., marginal costs of conventional power plants) into account. The implementation of a simple forecast model provides the investigation of control power. Basic components can be connected in various ways to analyze different electricity generation mix strategies (especially for the German federal state Bavaria). The particular situation in Bavaria motivated us to develop such a model, but due to its modular design, the model can be applied to any other region of the world.


The model is a hybrid simulation model: Due to the penetration by highly volatile RES and the complex situation to cover the electricity supply at all times, simulation was identified as an appropriate tool. We apply the commercial simulation tool AnyLogic 6, which allows to combine System Dynamics (SD) and Discrete-Event Simulation (DES) in one framework. SD-Models represent continous processes such as energy flows, i.e., the energy exchange between different components. DES is used for control decisions, e.g., final shutdowns of nuclear power plants. Components are active objects with internal SD and discrete event parts. 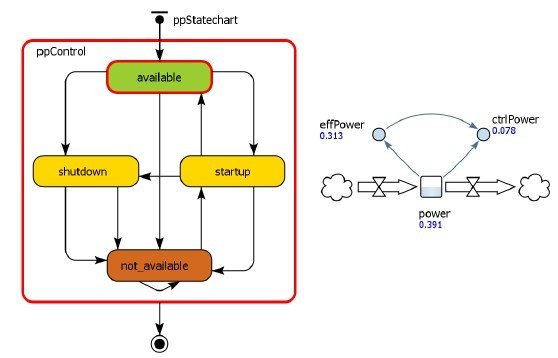