Being #26 in last years' Fortune 500 list, Cardinal Health is a billion dollar pharmaceutical distribution and logistics company. Its clients are hospitals, pharmacies, physicians, and individual consumers. They face a multitude of typical distribution warehouse challenges that are further complicated by the nature of pharmaceutical products, which are smaller in size, consumable, expensive, and could be life critical.

Company's warehouses have narrow passages, and workers operate big multilevel trolleys. That increases the probability of employees' mistakes and makes these mistakes costly.

The problem warehouse managers encountered continuously was trolley movement congestion. They thought the cause of it was in the picking algorithm and distribution of the SKUs in the warehouse. 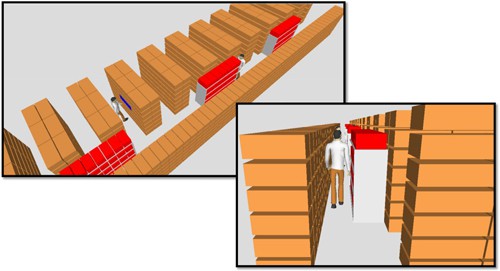 
The solution could be found by trial and error, which is a risky and expensive way, or by building a computer model of a warehouse and experimenting with it. Mathematical models did not provide a solution: they did not allow the company to trace the dynamics of the system and the uncertainties, namely how the congestion formed. Having this in mind, Brian Heath, Director of Advanced Analytics at Cardinal Health, decided to use agent-based modeling to simulate the warehouse system, as it allows for catching these behaviors. Agent-based simulation modeling reproduces how the warehouse operates dynamically and represents the system as an interaction in time between its elements (agents) – employees, SKUs, shelves, and other objects.

Experimenting with the model showed that managers were not right in defining the cause of the problem. In fact, the issue was not in an incorrect SKU distribution among the shelves, but in the workload distribution among the employees. Because of this, some employees moved along the warehouse faster and worked more, and others worked less and moved slower. Fixing the problem allowed all the workers to operate with equal speed, reducing congestion.

This is not the only warehouse optimization challenge that Cardinal Health solved during this simulation project. Altogether, the model allowed the company to save 3 000 000 annually. We do not know the amount of investment in model creation, but I assume it paid off the manifold.

More information on the warehouse optimization model, including the video presentation by Brian Heath, can be found in the Case Study section.