The FIFA World Cup is a magnificent international celebration of football, and we are really excited to have a presence in one of the host cities, Saint Petersburg. It is a wonderful place, with a new stadium to match. If you are visiting, we are sure you will enjoy! (Did you know the trains between cities are free?)

It is estimated that 1.5 million foreign football fans will visit the 2018 FIFA World Cup in Russia this June and July, with games taking place at 12 stadiums in cities from the Baltic to the Urals. To smoothly manage this influx of tourists, the city planners led a series of modernization projects. Here we look at an example involving the nation’s vast rail infrastructure.

On the right track

RZD, Russia’s largest rail network operator, sought to ensure the stations in the host cities would operate well under the increased load of the championship. To assess the capacity of buildings, identify bottlenecks, and make informed decisions on station layout, the company employed transport development consultants IRTS.

With the help of AnyLogic, IRTS, developed simulation models of the stations — capturing the current infrastructure, train schedules, and passenger service processes, including their behavior. Based on these models, the consultants then simulated the passenger numbers expected for the FIFA World Cup, helping to identify bottlenecks and develop recommendations for the optimal use of space. 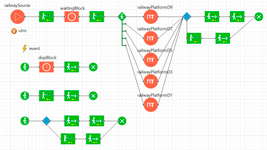 The work done by IRTS has given RZD a flexible tool for evaluating the operation of stations under varying levels of passenger use.

The models have been developed to be used standalone, without the need for the developer mode of AnyLogic. This will enable more users to conduct analysis and for planning decisions to be more informed and made more quickly.

⭐ Find out more in the full case study of this project, including videos of the models.

⚽ Who do you think will win? Will Germany retain the cup, will Spain claim it back, could Belgium provide a surprise, maybe England could take it home!? Give your thoughts below!