How can an overpopulated city fight traffic congestion?

Examples from many current metropolitan areas show that, apart from subways and buses, city railways can greatly improve traffic situations. Probably the most famous city rail system is the S-Bahn in Germany. In North America, one of the more well-known examples is the BeltLine in Atlanta, Georgia.

Meanwhile, the 7th biggest city in the world, Moscow, is stuck in one big traffic jam. The city has an extensive subway, bus, and tram network, but it doesn't seem to be enough. Recently, Moscow city planners have found a way to significantly improve the situation by using an old half-abandoned railway.

Moscow Ring Railway, built in 1908, bypasses the city's center and crosses residential districts and industrial areas. It passes through vastly populated districts that were not directly connected before. The railway is currently being used for freight traffic only. To launch passenger traffic, the operating company only has to add electricity and build stations. That is currently being done.

Many of the newly built stations will be connected to subway, commuter rails, and on-ground public transport by huge transfer hubs, which are expected to significantly ease traffic congestion. Obviously, capacity of these hubs had to be confirmed before the construction began. Pedestrian modeling was used for this project.

Passenger flows, at one of the future hubs, were simulated using AnyLogic software by the ITS Consulting Company for JSC Moscow Ring Railway. The aim of the simulation project was to evaluate the working performance of the hub at peak passenger load times in order to discover the elements limiting the capacity of the system (corridors, stairs, escalators, ticket barriers, ticket windows, fare boxes, etc.). The video of the model can be found below, as well as the whole case study on the project. 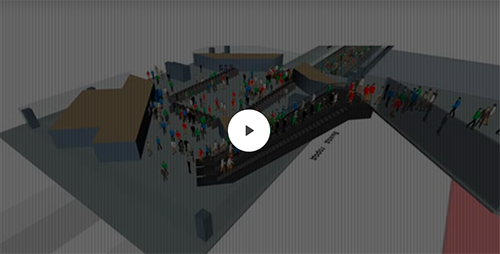 The effectiveness of city railways makes them one of the most important methods of public transportation in growing metropolitan areas, where most people simply can't use private vehicles because of the horrendous traffic jams. Pedestrian simulation provides an effective solution to avoid overcrowding in the future monstrous transport hubs.